Yesterday we decided to take a family day and visit Six Flags of New England.  Wet Mark and Jessica Matkovich, and Nick and Sarah.  Of course, as the only ones in the group with kids, we wound up spending most of the day with just the four of us.

We got tickets at the Submarine Base MWR office – a great deal for those able to get tickets there.  Our plan was to get there when it opened at 10:30.  We had a little late start, but were there by 10:40.

We picked a perfect day for a trip to the park.  It was overcast and threatened to rain all day – which meant no crowds – though maybe it being a week day was a bigger reason than the weather.  The overcast sky also meant that it wasn’t too hot.

The boys got their first chance to ride on real roller coasters.  Ben was just a little too short to get on a bunch of the rides (a lot of the rides need him to be 48″ tall; he is 47″ tall).  Will was just big enough to fit on all the rides (54″ tall).    We started the morning on the newest roller coaster – some sort of mouse maze type (Gotham City Gauntlet Escape).  Not very fast, but lots of turns and starts and stops.  It was a pretty good start.  We also spent a lot of time on the one they called “Catwoman’s Whip ” – a mild family coaster – but much better than the ones that are at the local fairs. 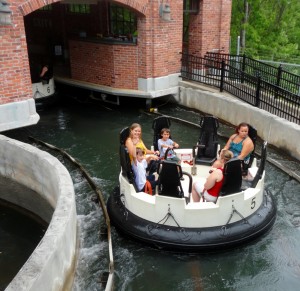 That afternoon, I was able to get Will on some of the bigger rides.  We started with the smaller of the two wooden coasters.  Ben was almost tall enough – next year he’ll be able to ride it.  Will came off that ride and said “That was SOOO scary.”  And he didn’t want to do it again.  So we went back to the smaller rides.  I finally convinced him that there was no line for the big wooden coaster – so he went on it with me.  Much scarier than the smaller one.  But he did it.  And he screamed every time we went down a hill.

And then we walked by the biggest ride in the park, “Bizarro” – a huge fast metal coaster.  With the first drop a 225 foot plunge and reaching 77 miles an hour.  There was no line in the afternoon, and he said he would try it.  Talk about scary……  But he did it.  He kept talking about it the rest of the day.  The final big ride we did was “Batman,” with two loops and two corkscrews.  He said that one wasn’t nearly as scary as the big one.

We finished the day by letting the boys run through “Pandemonium” several times by themselves… It is the best ride Ben could get on this year (the cars spin as the coaster goes around).  Then took the skyway back to the center of the park, and finished with a ride on “Catwoman’s Whip.”

Overall, we stayed until almost 7:30pm.  Nearly 9 hours at the park.  What a great day.

I’ve been slow posting on this blog… there is lots to do outside and around the house in the summer.  Finally it is hot enough this weekend, that writing seems like a good thing to do.

The big family trip this summer was a road trip to West Virginia. The trip started in the evening of the 24th.  We started with a short drive to New Jersey for a night sleep (leaving after the boys arrived here for their vacation period).  The next morning, we drove around a bit to find breakfast (and new headphones for Will) and then drove to Washington DC.  We stayed at the same hotel we stayed at last year (Homewood Suites in Alexandria VA).

We took it easy on Saturday, with dinner at the Olive Garden (it was my birthday dinner).  The next day we decided to head into Washington to visit the Holocaust Museum.  We got distracted.

When we arrived at the Mall, the boys wanted to walk to the Washington Monument.  It was right there, so why not.  When we got up to the monument, one of the other tourists gave us 4 tickets for the 10:30 am tour… normally you need to get down there very early to get tickets.  What good luck.  So we went to the top.  The boys thought the ride up was pretty cool, but got bored after 5 minutes at the top.  Then back down and to the Holocaust Museum.

We should have done lunch instead.  It was getting close to lunch time.  Will was getting hungry.  He couldn’t stand still at all while we were in the lobby of the museum.  We tried to walk through the children’s exhibit, but Will couldn’t stop running.  He got very upset when I took him outside.  He had a screaming meltdown on the way out.  Not the best day.  In hindsight we should have done lunch first, he would have been much happier on a full stomach.  But all he wanted to do was go back to the hotel and swim.

After lunch we took the metro back to the car and drove back to the hotel, spent the afternoon swimming and ordered pizza for dinner (after Will calmed down – he was very upset from the events of the morning).