The boys convinced Susanna to join them playing Minecraft.  I helped them set up a small server so they can all wander around the same Minecraft world.  I think Tucker is just along for the ride and warm space on the couch.  Time to “kick” them so they will go brush their teeth and go to bed.

It is a beautiful day outside. The sun is out and it is 50-degrees out. So, it seems like a perfect day to work inside on the trim. I can at least look outside at the nice weather. I also get to enjoy it in small bits as I go back and forth to the workshop. Of course the beautiful weather means the boys want to play inside.

Okay, that last part isn’t totally true. They are enjoying some time outside. But the warm weather also means mud. And lots of mud. Maybe it would be better to play inside.

I am working on the trim around the ceiling. I decided to skip the traditional crown molding, and use a decorative half-round piece of trim attached on top of a 3/8″x3″ piece of trim. The trim will be painted to match the rest of the trim in the room. I have been milling the 3/8 x 3 piece from random pieces of lumber I have in the garage. I think some of it is cedar, and the rest out of maple. It will all look the same when it is painted.

I’m not quite done yet; I have two more pieces to mill and attach and a long stretch for the half-round molding.

Susanna is snuggling in bed. The boys are playing on their electronics, and I am playing on the computer. Targa and Tucker are sleeping. After breakfast we will put down the electronics, and enjoy what looks to be a beautiful day. I’ll just pretend that I’m outside when I’m sanding the ceiling in the hallway.

There was nothing really special about this morning. We put Tucker out early. Targa was still sleeping in Will’s room.

The weather was cool and rainy, and Tucker was barking to get back inside not too much later. When Targa got up, he went out and Tucker followed. That was the start of the problem.

I brought Targa back in a few minutes later, but Tucker was nowhere to be found. He hadn’t returned 45 minutes later when it was time for the boys to head out to the bus stop and me to work.

We waited at the stop. I waited for my neighbor to arrive. The plan was to ask her to put Tucker back in the house if she saw him during the day. But before I could ask her, I saw a slightly overweight beagle mix wandering down our road. Just in time.

So, thank you Tucker for making the morning just a little bit more stressful than it needed to be.

It felt like a somewhat disorganized holiday. At least it did for me. The boys arrived this morning, so we took it easy for most of the day. Plus, I think I’ve been spending too much time playing on the computer – I was going to take a break today, but Will wanted to install Linux on his netbook and download games. And that took a little assistance. But the day wasn’t all wasted on the computer or chasing other shiny objects that my ADHD latches onto.

I did get the hall ceiling painted, and the light installed. The light is flush to the ceiling, and the raking light highlights the imperfections in my drywall work. The ceiling looked good before the light was installed, but I will need to try to smooth out the ceiling a little more this week, and repaint the ceiling. There is a huge difference in how smooth a surface looks with a raking light compared to the same surface with normal ambient light.  That is life. A bit of a bummer, but not a huge pain.

This afternoon we went out to the Ledyard Middle School and went sledding. The sledding hill was perfect, and the weather was reasonably warm. I didn’t bring a good camera, so I only have pictures from the iPhone.

We also took a look at a mooring for the boat on the Niantic river. Last year we parked at the Submarine Base marina. The marina is reasonably priced, but a mooring is still cheaper. And the Niantic river looks much nicer than the Thames. Though it is covered in ice right now. It is just nicer looking ice. We will get the mooring for the season for about the same price as two months at the marina. The drawback of the mooring is that we will need to row out to our boat. I didn’t plug the boat into shore power once last summer – so I don’t think not having electricity will be much of a problem. Maybe I’ll get a solar panel to charge the battery.

We finally had a break in the snow. Well, at least long enough to run to Home Depot and pick up drywall for the ceiling in the hall. It is not a large space, taking less than two sheet of drywall.

The ceiling is L-shaped, and this morning I started cutting pieces to cover up the old plaster.  Installing drywall over plaster is pretty quick. The drywall screws into the lath which is attached to the joists, so it is pretty quick to attach.

It just sucks to work overhead. Of course the plaster is loose, so I am covered in a fine coat of plaster dust. The drywall isn’t that heavy, but heavy enough to make it tiring to hold up for too long.

So far I have three pieces of the four installed. I’m taking a few minutes to drink some water and eat a snack before tackling the final piece. After that comes using the drywall compound and tape to cover the joints and screws.

Susanna and I get another quiet day at home thanks to a layer of snow and rain.  The last couple of extra days at home I had been motivated to get lots of projects done.

Not so much today. I kind of feel like sitting around and taking it easy. That is, between shovelling the driveway. I learned my lesson last week, and shovelled before the rain started and the snow got heavy. But I probably should still go back out and get rid of the layer of slush that has accumulated over the past couple of hours. It will be a lot less fun to clear out once it freezes tonight.

We had the boys over this morning for a couple of hours – we had the day off, and their mother had to work. Will spent some time helping me shovel; Ben and Susanna completed a jigsaw puzzle. Both boys got lots of time to just hang out and play on electronics. 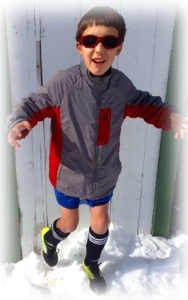 Ben is enjoying the sunny day before heading to his game.

Winter is dragging on. The cold keeps me from the workshop, and keeps the family inside more than we would like. The boys want to play on their electronics more than they should. The dogs don’t get the exercise that they want. The house is cold, and the oil bills are expensive.

But, winter isn’t all bad. It is a chance to try to find other projects to work on.  Like writing in my blog. Unfortunately I don’t like writing when there isn’t much to write about. I like to think about spring and the summer. And plan. I like to plan. It is fun to talk about ideas. But I’m not sure it is as much fun to listen (just ask Susanna).

February brings Will’s birthday. Which means a birthday party. We get to have his birthday party every other year, and this year was our turn.  Winter birthdays are difficult. The kids don’t want to spend as much time outside, and a large group of 5th graders is way too loud to keep inside for very long.

This year we held the party in the boys’ clubhouse above the garage. I moved the portable heater up there, and the room was warmer than the house. They can be as loud as they want, and jump on the furniture out there.  I think everyone (mostly) had a good time; but if you get enough 5th graders together, you will eventually find a pair that don’t always get along.

I forgot to make pizza dough for Friday night, so pizza/movie night was moved to last night. The boys even helped clean up from dinner (and washed the dishes).

So, what are we all doing to keep occupied during the cold weather?

Ben and Susanna are working on a 1000-piece puzzle. Ben has been building Legos and practicing his trumpet.

Will has been writing a book. I have been trying to get him to take some of the creative ideas that are in his mind and put them down in words. It is difficult for him, he types much slower than he thinks. But he is making progress (as of this morning, he has a chapter and a half written). When he isn’t writing, he is reading or trying to earn time to play on his iPod.

Both boys are playing indoor soccer. Will and Ben are on one team together, and Ben is on a second team without his brother.

Susanna and I are trying to exercise more, and are trying to run a 5k race in March. It has been a long time since I have run much at all, and it is slow getting back into running.

I have been doing small house projects and on warmer days working in the workshop (a very little). We have a three-day weekend next weekend without the boys. Our plan is to finish the hallway and maybe some smaller projects (e.g. the last set of hinges on the kitchen doors, shelves in the storage loft, clean the basement).