Approximately two months ago I decided to enter the Sawdust Chronicles 2010 build challenge.  Here is the writeup from that project.

Here is the final project:

I finished the build project.  I wasn’t sure if I was going to make it (it has been a busy month).  But I was able to do the final assembly and finish today…  I may decide to do another coat of varnish on the top of the bench at a later date, but it is completed and added to the furniture in the house.

What were my challenges?  I had initially thought of doing a bench out of red oak with an inlay.  However the oak is turned out pretty plain (too mid-toned – I wanted a lighter shade of wood for the top).  So I used the oak to make a prototype bench.  What a great idea.  It was a technical challenge – I had never constructed something like this before – and a design challenge – I didn’t really like the original design/proportions.  Overall it was a great learning project, and even better to have a deadline to work to to force me to finish it, even if I had to work a little faster than I liked by the end.

After I constructed the prototype, I posted it for comments on lumberjocks.com.  Based on those comments (and my ideas), I decided to change the design of the bench: 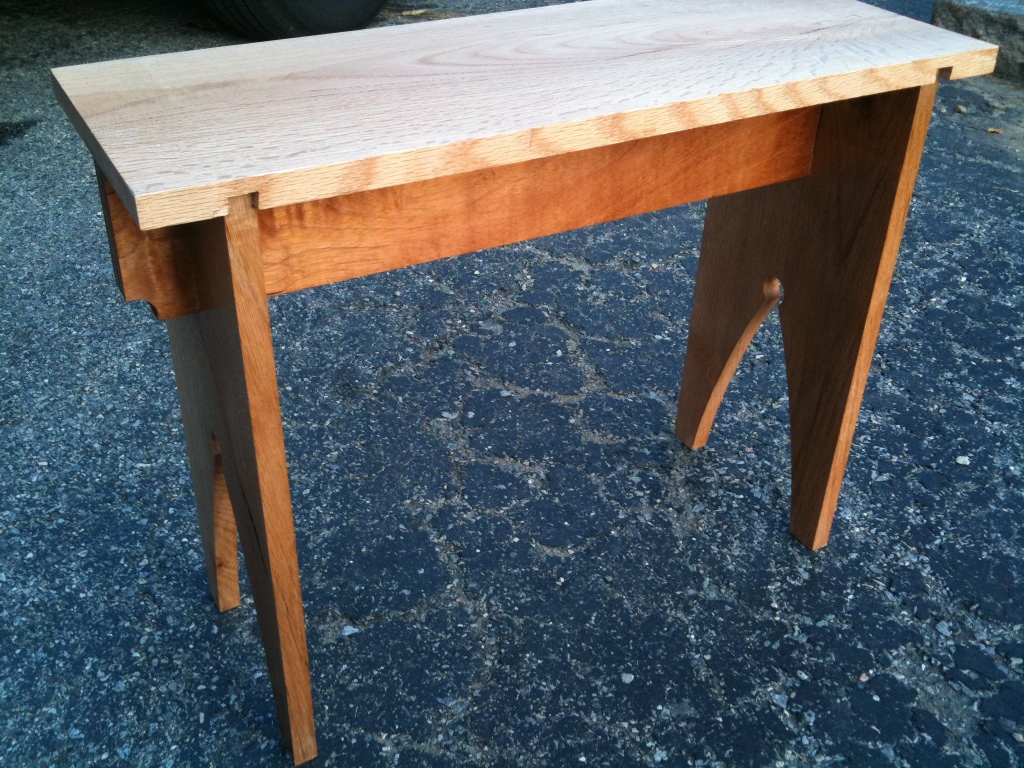 The first step of the construction was to make the top, and inlay the leaves.  I made the top of birch (I believe).  I cut the leaves on the scroll saw and cut the inlays with the router (based on a podcast by Marc Spagnuolo).  It turned out to be more challenging than it appeared by the podcast, but overall I like how the inlay turned out, and will probably incorporate that type of inlay into future projects.

I routed the sliding dovetail slot on the top.  On the prototype I made a stopped dovetail, on this one I made a through dovetail and used a piece of scrap walnut as a filler for the front of the dovetail.  I didn’t fill the back of the dovetail (so the bench can come apart, but not easily right now).  I think if I had more time I may have added one for the back.

I then glued up the legs from sapele and milled the stretcher from the same.  I believe it is sapele, but I have acquired a lot of lumber from a friend, and it wasn’t all labeled very well.

I cut the curve on the stretcher and used a pattern bit to rout the curve to final shape.

The stretcher and legs are joined by a half-lap joint, and then the while leg/stretcher assembly is then attached to the top using a sliding dovetail.  I used an American Woodworking project as inspiration for the construction method.  I cut the slots for the legs/stretcher on the bandsaw and cleaned up by hand.

What did I do wrong?  I made a couple of technical mistakes on the final project.  The half-lap joints aren’t as clean as I would like them to be.  I had the same problem on the prototype.  I may have been rushing a little bit to get the project out the door on the final project.  I also started to drill one of the cutouts at the end of the stretcher on the wrong side.  It is on the back so isn’t very visible, but if I had more time, I would have cut a new stretcher and started over.  I also finished the top prior to assembly, but didn’t have time to prefinish the rest of the pieces.  I think it would have been easier to finish if I had prefinished all of the pieces.

What would I do differently the next time?  Maybe use wood that would contrast even more (maybe ash for the top and walnut for the legs).  I would prefinish all the pieces.  I would try to get the half-lap joints tighter.  I really liked the idea of building a full-sized prototype to help with construction and design ideas (I included a picture of the prototype to show the differences).

What were my costs?  I purchased the red oak at $1/bdft, and the birch and sapele for about the same.  Even if I had to pay market for the lumber, I didn’t use much lumber to create the project, maybe 8 bdft.  Total cost for lumber I’ll say is $50.  Plus $15 for a can of wiping varnish and $5 for glue and sandpaper for a total construction cost of $70.

The only tools I purchased for this was a new dovetail bit for the router (maybe $20).

Below are pictures of the project

View all posts by Chuck