I’m finally making some progress on the sailboat. The weather had been too cold over the past couple of weeks for me to want to work on the boat – but the goal is to get the boat in the water by the boys’ spring break in mid-April, so I needed to get some work done.

Saturday morning Will and I went to Defender Marine Outfitters for their annual warehouse sale. It was completely packed, but Will did very well walking around with me (and waiting line a little longer than we wanted when all the credit card processing went down (luckily I had a check book, so we were able to check out while the line kept getting longer and longer).  We picked up some of the supplies we needed for the season. Will go a wetsuit for himself, and I picked up flares, a small inflatable boat, a new masthead light, and a first aid kit.

Sunday I decided to move the boat from where it had been sitting between the house and the garage. The boat got almost no sun on it all day and stayed cold. I moved it to a place near the workshop. Closer to the tools and (hopefully) a bit warmer in the sun.

I also took time to start getting the mast untangled from all of the rigging. The mast spent the past couple of years sitting behind the barn. Last year, Susanna, the boys, and I pulled the mast off and cleaned it up.  But I never spent the time to inspect and organize the rigging.

At Defender, I purchased a Davis Mega-Light masthead light. I had to enlarge the hole on the front of the mast head (it looked like it had, in a previous live, been used as an VHF antenna). The masthead light required a 1/2″ hole. The leads to the light need to be soldered to the wires that are running up (inside) the mast. Unfortunately, I couldn’t find any solder (though I did find the soldering iron) – so the final connection will have to wait until another day. 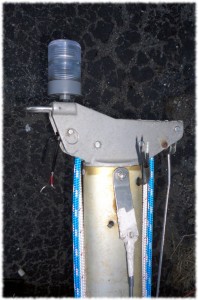 I also removed the stainless plate that was attached to the back part of the mast. I’m not sure what it was used for previously (I think there was an old, cheap, masthead light). I will probably attach a topping lift to the plate. Or just leave it off.

I also placed an order for the needed trailer winch (the old one was lost years ago) and trailer lights. Hopefully I’ll have all the parts needed to put the boat in the water.  Now I just need to spend a day or two attaching the deck hardware.