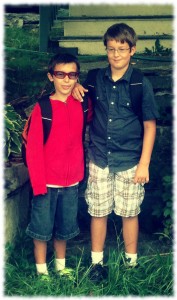 I had to pick Will and Ben at school a few minutes early today so we could make Ben’s annual physical exam. In order to pick up the boys, I had to check in with the main office and sign them out there. As I was waiting for them both to come down, a teacher I hadn’t’ met before was in the office. She introduced herself as Will’s teacher.

While talking, she mentioned that she wanted to meet Ben. She said that she had heard that Ben looked a lot like Will, but wore glasses. I said, “Oh, Will wears glasses as well.” Will promptly walked into the office without glasses on. He had left them at home this morning.  Of course, a few minutes later, Ben arrived wearing his glasses.

That was today’s hint that Will isn’t wearing his glasses at school as often as he should be. Or just chalk it up as another one of those ADHD moments (though this one was Will’s moment).

View all posts by Chuck