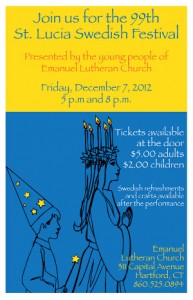 Celebrating Sankta Lucia is a Swedish tradition that Susanna has brought with her. According to by Agneta Lilja, Södertörn University College (posted on sweden.se):

The Lucia tradition can be traced back both to St Lucia of Syracuse, a martyr who died in 304, and to the Swedish legend of Lucia as Adam’s first wife. It is said that she consorted with the Devil and that her children were invisible infernals. Thus the name may be associated with both lux (light) and Lucifer (Satan), and its origins are difficult to determine. The present custom appears to be a blend of traditions….

The concert is a celebration of light, with Lucia wearing a crown of candles and each member of cast carrying a candle.  According to sweden.se:

The real candles once used are now battery-powered, but there is still a special atmosphere when the lights are dimmed and the sound of the children singing grows as they enter from an adjacent room.

Tradition has it that Lucia is to wear “light in her hair,” which in practice means a crown of electric candles in a wreath on her head. Each of her handmaidens carries a candle, too. Parents gather in the dark with their new digital cameras at the ready.

The star boys, who like the handmaidens are dressed in white gowns, carry stars on sticks and have tall paper cones on their heads. The brownies bring up the rear, carrying small lanterns.

The Yesterday we shared in that tradition by attending a Lucia concert in Hartford. The boys found the concert a little boring, but it is good to experience new things (and learn to sit though things that aren’t as exciting as watching a movie). This is the second year we have celebrated the holiday here. Last year we attended the concert at the Swedish Church in New York City.

The concert last night was very nice. Of course, the big concert in NYC the year before was amazing – there was no comparison between the two. Of course the concert at the Swedish Church is significantly more expensive and a much longer trip.